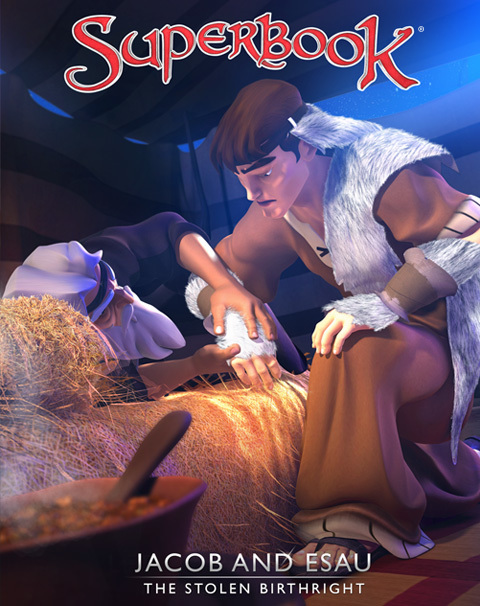 27 s the boys grew up, Esau became a skillful hunter. He was an outdoorsman, but Jacob had a quiet temperament, preferring to stay at home.

1Then Jacob looked up and saw Esau coming with his 400 men. So he divided the children among Leah, Rachel, and his two servant wives.

2He put the servant wives and their children at the front, Leah and her children next, and Rachel and Joseph last.

3Then Jacob went on ahead. As he approached his brother, he bowed to the ground seven times before him.

4Then Esau ran to meet him and embraced him, threw his arms around his neck, and kissed him. And they both wept.

5Then Esau looked at the women and children and asked, “Who are these people with you?”
“These are the children God has graciously given to me, your servant,” Jacob replied.

8″And what were all the flocks and herds I met as I came?” Esau asked.
Jacob replied, “They are a gift, my lord, to ensure your friendship.”

9″My brother, I have plenty,” Esau answered. “Keep what you have for yourself.”

10But Jacob insisted, “No, if I have found favor with you, please accept this gift from me. And what a relief to see your friendly smile. It is like seeing the face of God!

11Please take this gift I have brought you, for God has been very gracious to me. I have more than enough.” And because Jacob insisted, Esau finally accepted the gift.

13But Jacob replied, “You can see, my lord, that some of the children are very young, and the flocks and herds have their young, too. If they are driven too hard, even for one day, all the animals could die.

14Please, my lord, go ahead of your servant. We will follow slowly, at a pace that is comfortable for the livestock and the children. I will meet you at Seir.”

15″All right,” Esau said, “but at least let me assign some of my men to guide and protect you.”
Jacob responded, “That’s not necessary. It’s enough that you’ve received me warmly, my lord!”

16So Esau turned around and started back to Seir that same day.

17Jacob, on the other hand, traveled on to Succoth. There he built himself a house and made shelters for his livestock. That is why the place was named Succoth (which means “shelters”).

18Later, having traveled all the way from Paddan-aram, Jacob arrived safely at the town of Shechem, in the land of Canaan. There he set up camp outside the town.

19Jacob bought the plot of land where he camped from the family of Hamor, the father of Shechem, for 100 pieces of silver.*

1One day when Isaac was old and turning blind, he called for Esau, his older son, and said, “My son.”
“Yes, Father?” Esau replied.

3Take your bow and a quiver full of arrows, and go out into the open country to hunt some wild game for me.

4Prepare my favorite dish, and bring it here for me to eat. Then I will pronounce the blessing that belongs to you, my firstborn son, before I die.”

5But Rebekah overheard what Isaac had said to his son Esau. So when Esau left to hunt for the wild game,

6she said to her son Jacob, “Listen. I overheard your father say to Esau,

7`Bring me some wild game and prepare me a delicious meal. Then I will bless you in the LORD’s presence before I die.’
8Now, my son, listen to me. Do exactly as I tell you.

9Go out to the flocks, and bring me two fine young goats. I’ll use them to prepare your father’s favorite dish.

10Then take the food to your father so he can eat it and bless you before he dies.”

11″But look,” Jacob replied to Rebekah, “my brother, Esau, is a hairy man, and my skin is smooth.

12What if my father touches me? He’ll see that I’m trying to trick him, and then he’ll curse me instead of blessing me.”

14So Jacob went out and got the young goats for his mother. Rebekah took them and prepared a delicious meal, just the way Isaac liked it.

15Then she took Esau’s favorite clothes, which were there in the house, and gave them to her younger son, Jacob.

16She covered his arms and the smooth part of his neck with the skin of the young goats.

17Then she gave Jacob the delicious meal, including freshly baked bread.

19Jacob replied, “It’s Esau, your firstborn son. I’ve done as you told me. Here is the wild game. Now sit up and eat it so you can give me your blessing.”

20Isaac asked, “How did you find it so quickly, my son?”  “The LORD your God put it in my path!” Jacob replied.

21Then Isaac said to Jacob, “Come closer so I can touch you and make sure that you really are Esau.”

22So Jacob went closer to his father, and Isaac touched him. “The voice is Jacob’s, but the hands are Esau’s,” Isaac said.

23But he did not recognize Jacob, because Jacob’s hands felt hairy just like Esau’s. So Isaac prepared to bless Jacob.

25Then Isaac said, “Now, my son, bring me the wild game. Let me eat it, and then I will give you my blessing.” So Jacob took the food to his father, and Isaac ate it. He also drank the wine that Jacob served him.

26Then Isaac said to Jacob, “Please come a little closer and kiss me, my son.”

27So Jacob went over and kissed him. And when Isaac caught the smell of his clothes, he was finally convinced, and he blessed his son. He said, “Ah! The smell of my son is like the smell of the outdoors, which the LORD has blessed!

28″From the dew of heaven  and the richness of the earth, may God always give you abundant harvests of grain  and bountiful new wine.

30As soon as Isaac had finished blessing Jacob, and almost before Jacob had left his father, Esau returned from his hunt.
31Esau prepared a delicious meal and brought it to his father. Then he said, “Sit up, my father, and eat my wild game so you can give me your blessing.”

33Isaac began to tremble uncontrollably and said, “Then who just served me wild game? I have already eaten it, and I blessed him just before you came. And yes, that blessing must stand!”

34When Esau heard his father’s words, he let out a loud and bitter cry. “Oh my father, what about me? Bless me, too!” he begged.

35But Isaac said, “Your brother was here, and he tricked me. He has taken away your blessing.”

36Esau exclaimed, “No wonder his name is Jacob, for now he has cheated me twice.* First he took my rights as the firstborn, and now he has stolen my blessing. Oh, haven’t you saved even one blessing for me?”

37Isaac said to Esau, “I have made Jacob your master and have declared that all his brothers will be his servants. I have guaranteed him an abundance of grain and wine—what is left for me to give you, my son?”

38Esau pleaded, “But do you have only one blessing? Oh my father, bless me, too!” Then Esau broke down and wept.

39Finally, his father, Isaac, said to him, “You will live away from the richness of the earth,  and away from the dew of the heaven above.

40You will live by your sword,  and you will serve your brother. But when you decide to break free,  you will shake his yoke from your neck.”

22During the night Jacob got up and took his two wives, his two servant wives, and his eleven sons and crossed the Jabbok River with them.

23After taking them to the other side, he sent over all his possessions.

24This left Jacob all alone in the camp, and a man came and wrestled with him until the dawn began to break.

25When the man saw that he would not win the match, he touched Jacob’s hip and wrenched it out of its socket.

26Then the man said, “Let me go, for the dawn is breaking!”  But Jacob said, “I will not let you go unless you bless me.”

28″Your name will no longer be Jacob,” the man told him. “From now on you will be called Israel,* because you have fought with God and with men and have won.”

29″Please tell me your name,” Jacob said.  “Why do you want to know my name?” the man replied. Then he blessed Jacob there.

30Jacob named the place Peniel (which means “face of God”), for he said, “I have seen God face to face, yet my life has been spared.”

23And the LORD told her, “The sons in your womb will become two nations. From the very beginning, the two nations will be rivals. One nation will be stronger than the other; and your older son will serve your younger son.”